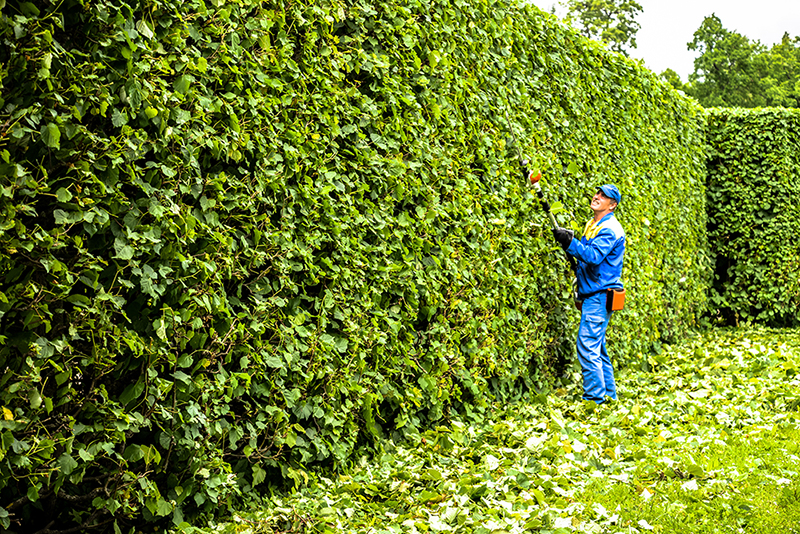 Hedge trimming is a lot less terrifying than it sounds. In other words, even if you’ve never attempted a DIY project before, you should be able to pull this one off. Hedge trimming is best done in the late winter or early spring when the plants are dormant. However, it would help if you waited until after the blooming season to prune early spring flowering hedges. One of the best parts about hedge trimming is that it’s one of those DIY activities that doesn’t require a lot of expertise. You should be good to go with the following four easy steps:

This will assist in catching trash and simplify the cleaning process. You won’t need to rake off branches and other yard waste from the lawn.

Use your hedge shears or loppers to cut off (remove totally) up to “one-third… of the oldest branches,” enabling sunshine and air to enter the hedge inside. It would help if you did this in addition to removing dead branches from the fence.

Remember another rule of thumb before you get started: no one branch should have more than a third of its length lopped off. If you have a plant with three feet long branches, you shouldn’t cut off more than one foot of them per year.

Make a mild beginning. Now and again, take a step back to assess the progress of the hedge from a bird’s-eye view. When hedge trimming, you can use a string line to ensure a clean slash every time. Next, keep your shears parallel to the string as you make each cut. You can consistently achieve straight lines using this method.

Also, remember that hedge trimming should be done so that the bottom is somewhat broader than the top. The lowest section of the hedge receives more light, promoting robust and lush growth. A ladder will be necessary if your fences are very high.

You may question why there is no mention of gas, cordless or electric trimmers. Many professionals do not recommend using these electric hedge shearers or trimmers because they can harm the hedge’s health and aesthetics. When you prune a plant, new growth appears on the outside but not inside. Inside a regularly trimmed hedge, you’ll find nothing but brown. The interior of a manually pruned hedge will be green because sunlight and air can reach the area there.